I previously crafted my own version of HHKB Topre to MX adapter in summer 2016. It was originally inspired by the CM Storm NovaTouch TKL's MX compatible stems. Then the famous keyboard enthusiast matt3o took the idea to make his versions of the adapters.

I tried to print matt3o's versions out, but somehow they have some tiny dimension errors. Especially for the 2.0 beta version, the base room is too small that stuck the rubber dome when pressed. Moreover, he only made the 1u adapters, so I can't replace the whole keyboard with MX keycaps.

Here it comes my improved version of Topre to MX adapters. (Open source on GitHub!) Everything is re-calculated and designed from scratch without basing on matt3o's design. I made the 1u, 2.25u adapters, and recently the stabilizers for 6.25u spacebar. I've 3D printed, tested, and improvised these for many times. They are very mature and stable at this stage. You can confidently replace all your HHKB keycaps using my design.

This project is licensed under a Creative Commons Attribution-NonCommercial-ShareAlike 4.0 International License. You can download and use these designs for personal use for free. If you want to support this project, you can buy these parts from my Shapeways shop where I make 10% fixed profits, or you can donate to my PayPal or BitCoin wallet: 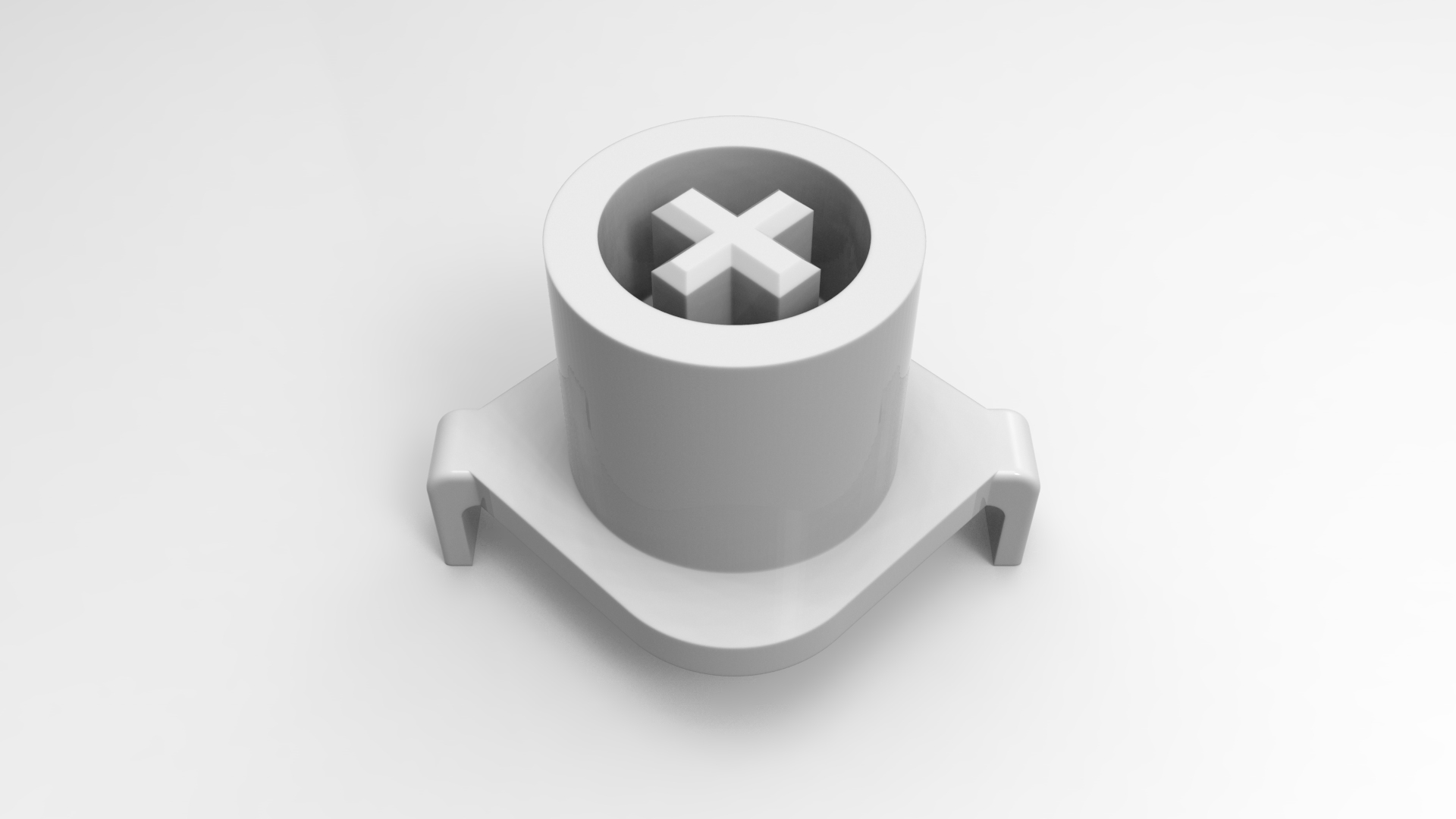 Here is the 2.25u plunger. It's designed for compatibility with the HHKB 2.25u metal wire. 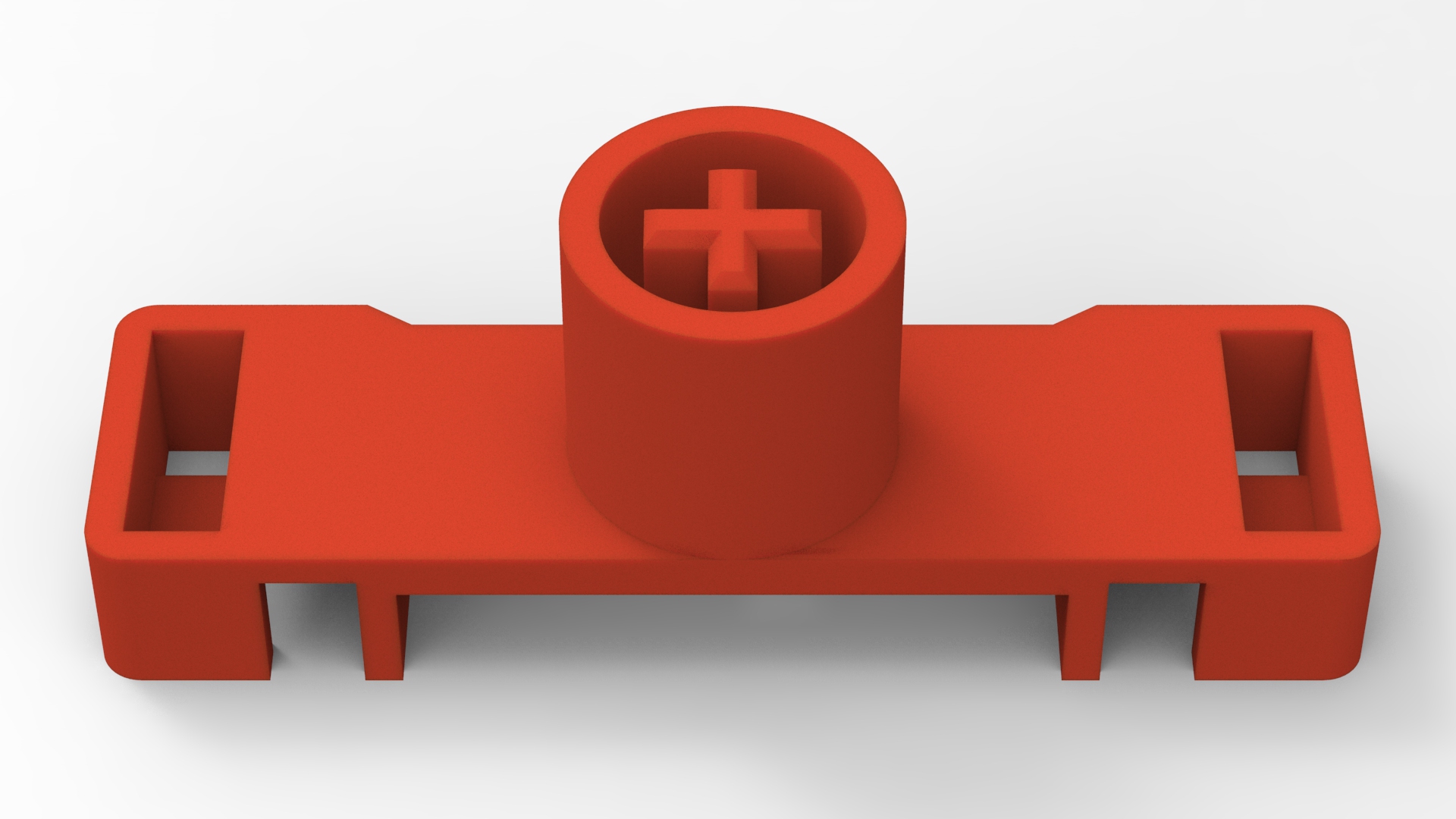 (More about spacebar in update below)

Here is a replicated 6u Topre spacebar model before I came up with a solution for MX spacebar. 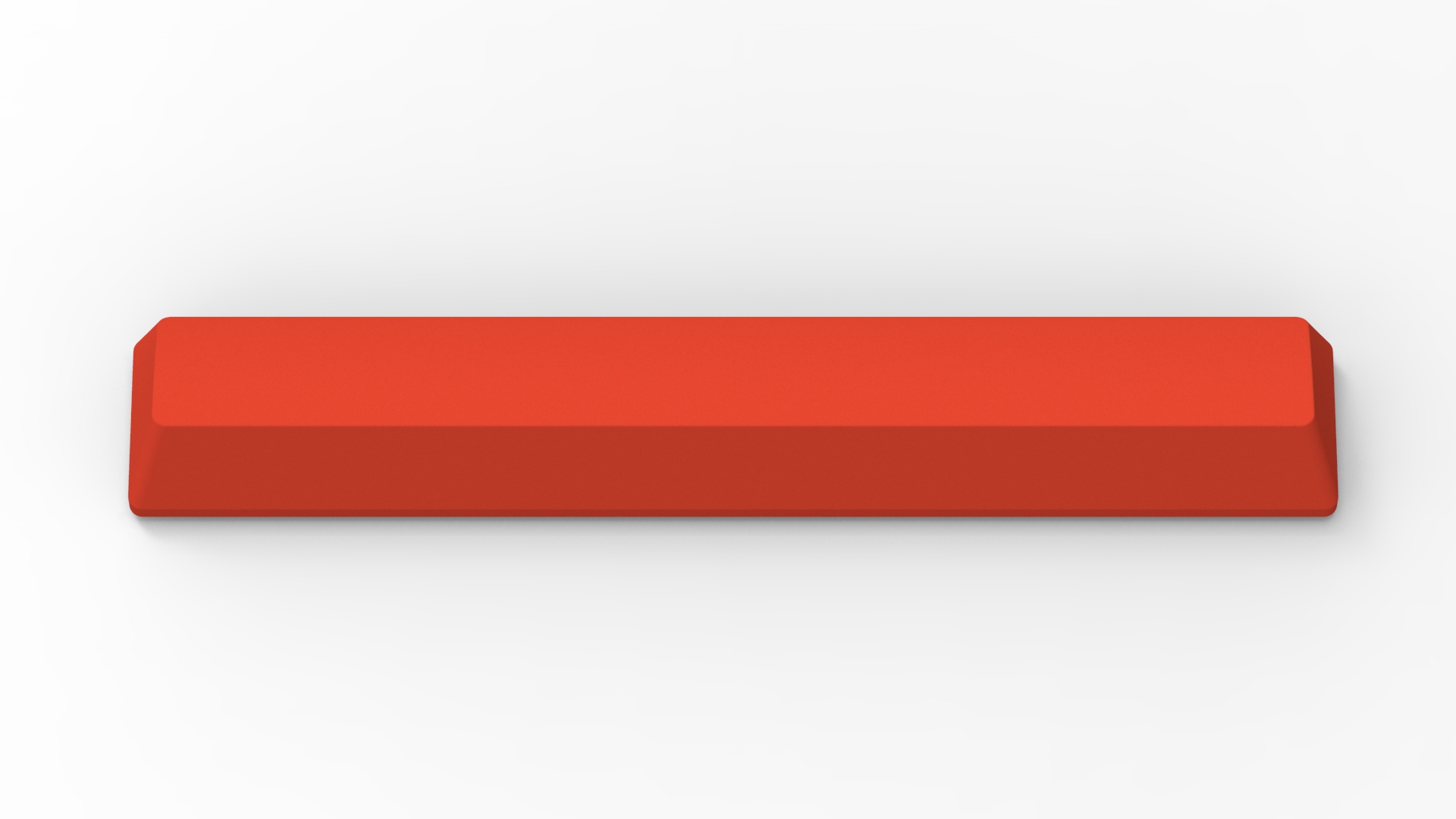 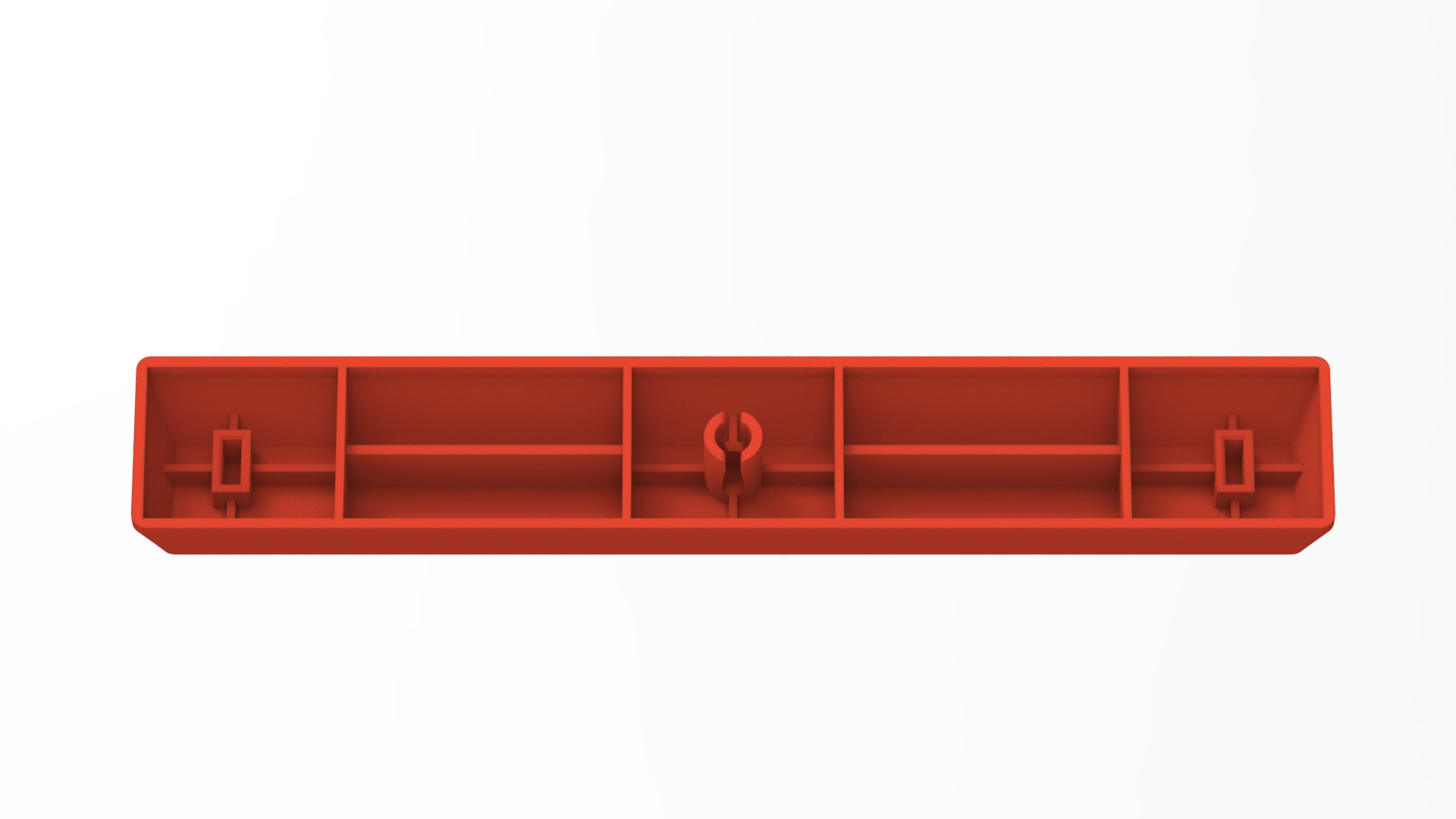 Recently some friends of mine requested for a dozen of adapters for their HHKB MX keycaps mods. I helped them install the adapters. They tried it with their MX keycaps, and they were all satisfied with the new stems' feeling. "It's different," said my friend, "but I kinda like it." Indeed, the typing sound was more clear and the touching is more ... it's hard to describe, but personally I prefer the new feeling. It's more like typing. I think it also depends on the material. I 3D printed these in SLA material. I would recommend it if you want to print them.

I took some photos while installing them on my friends' HHKBs. 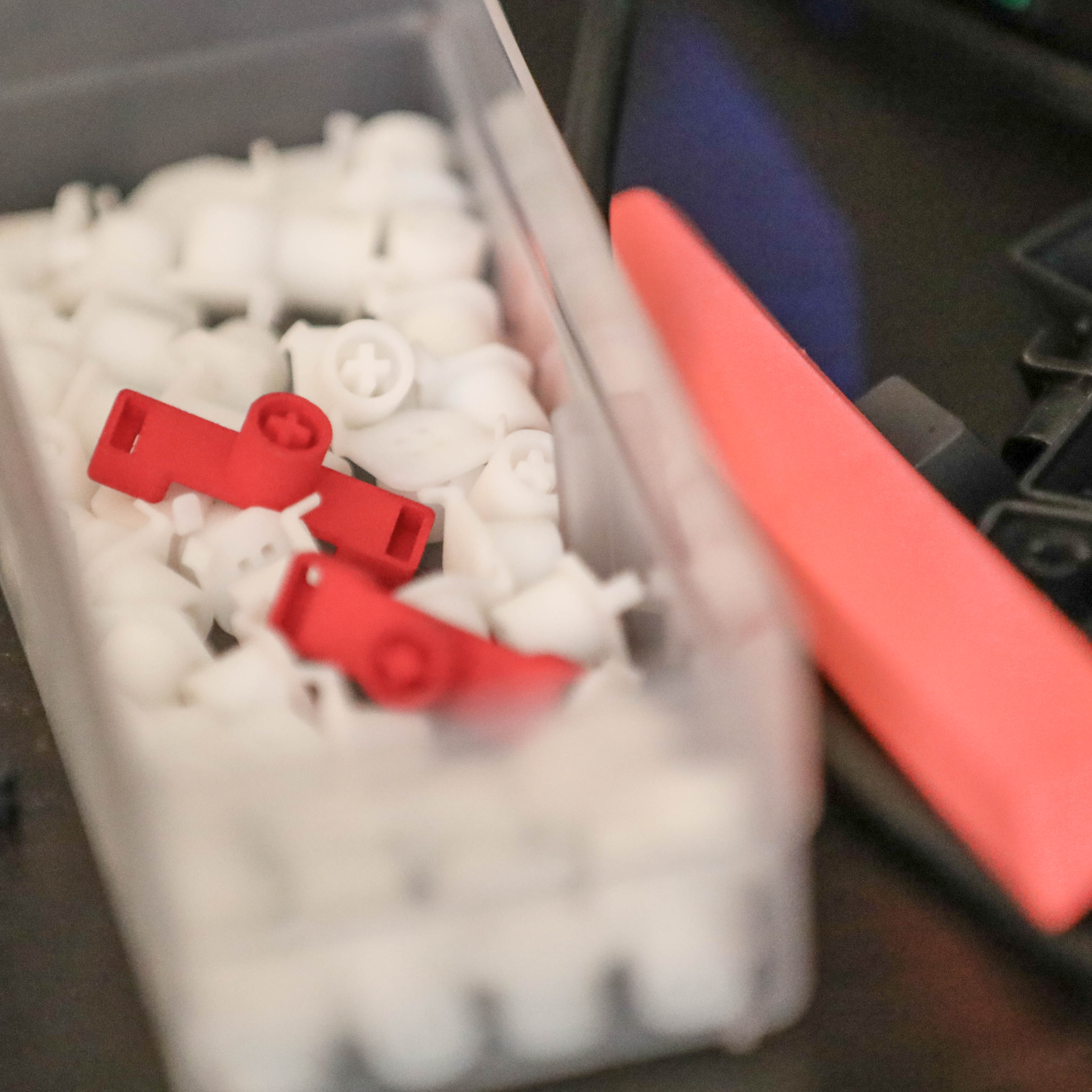 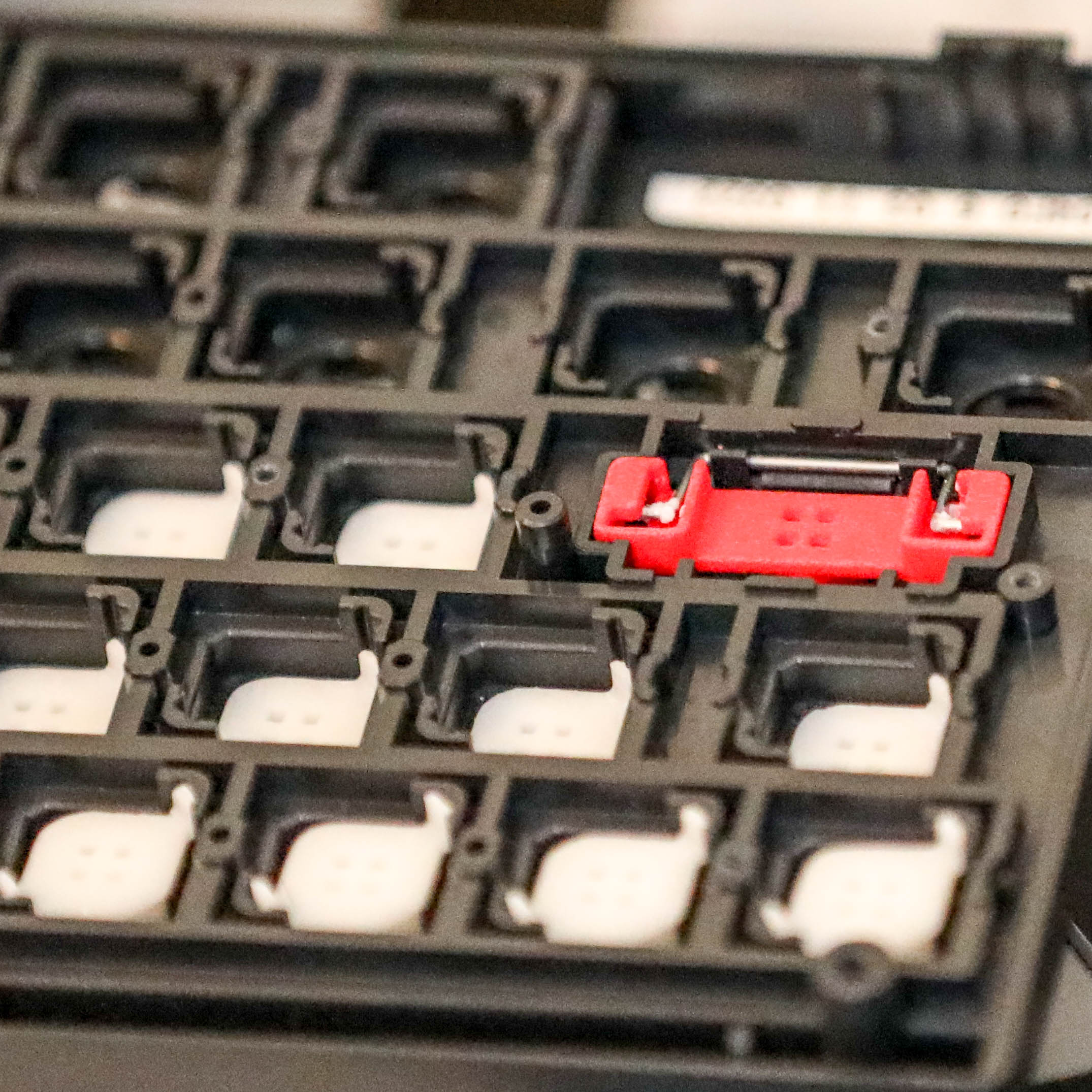 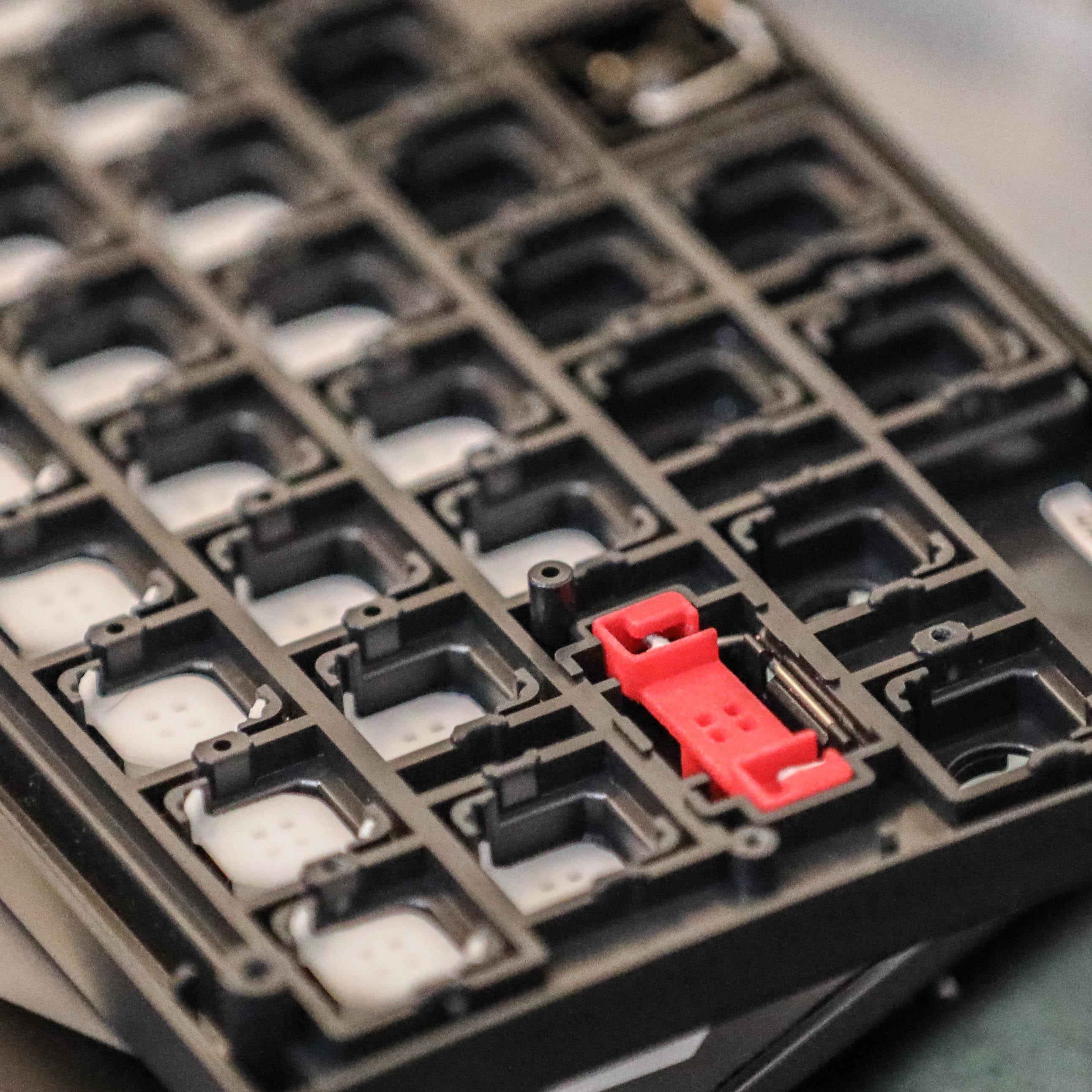 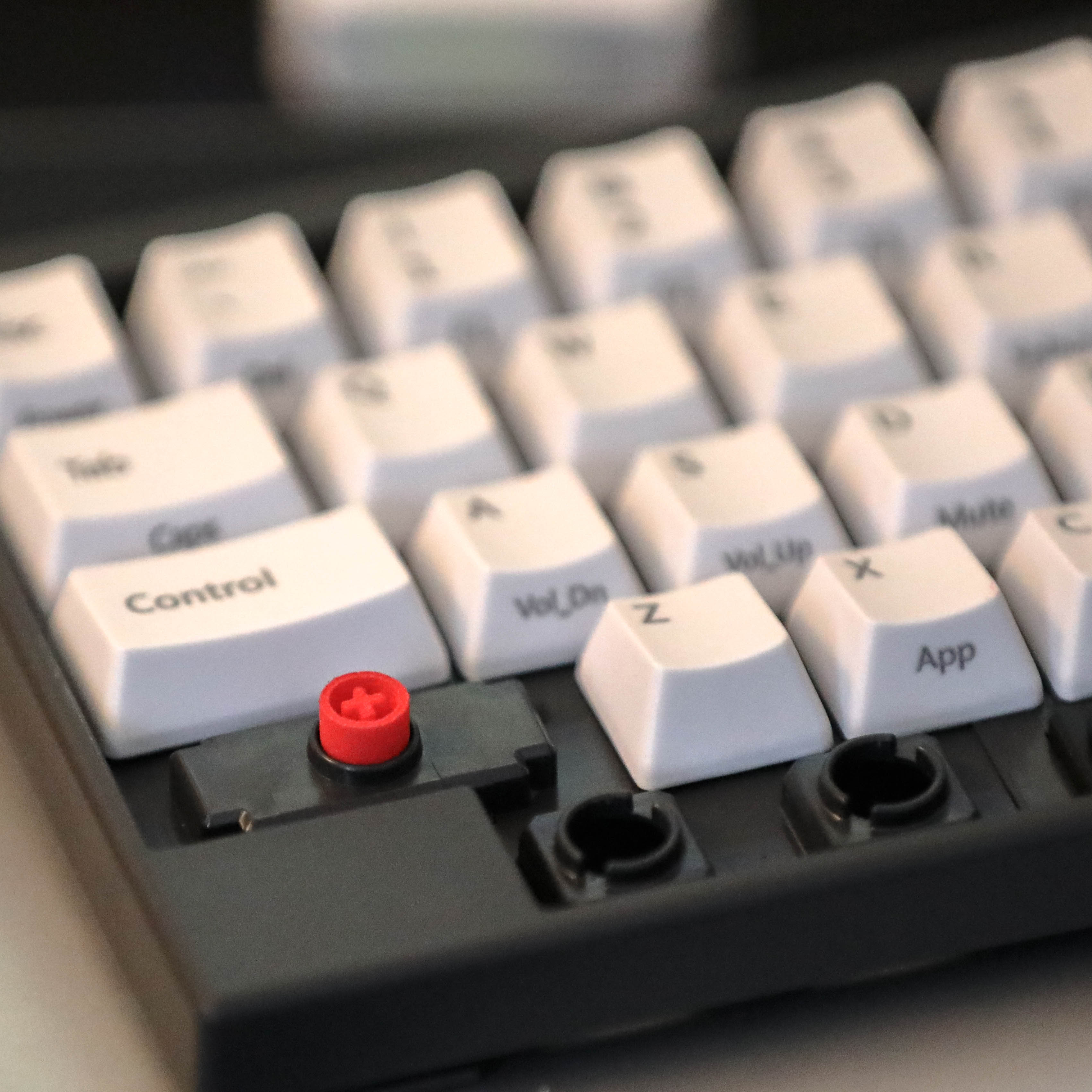 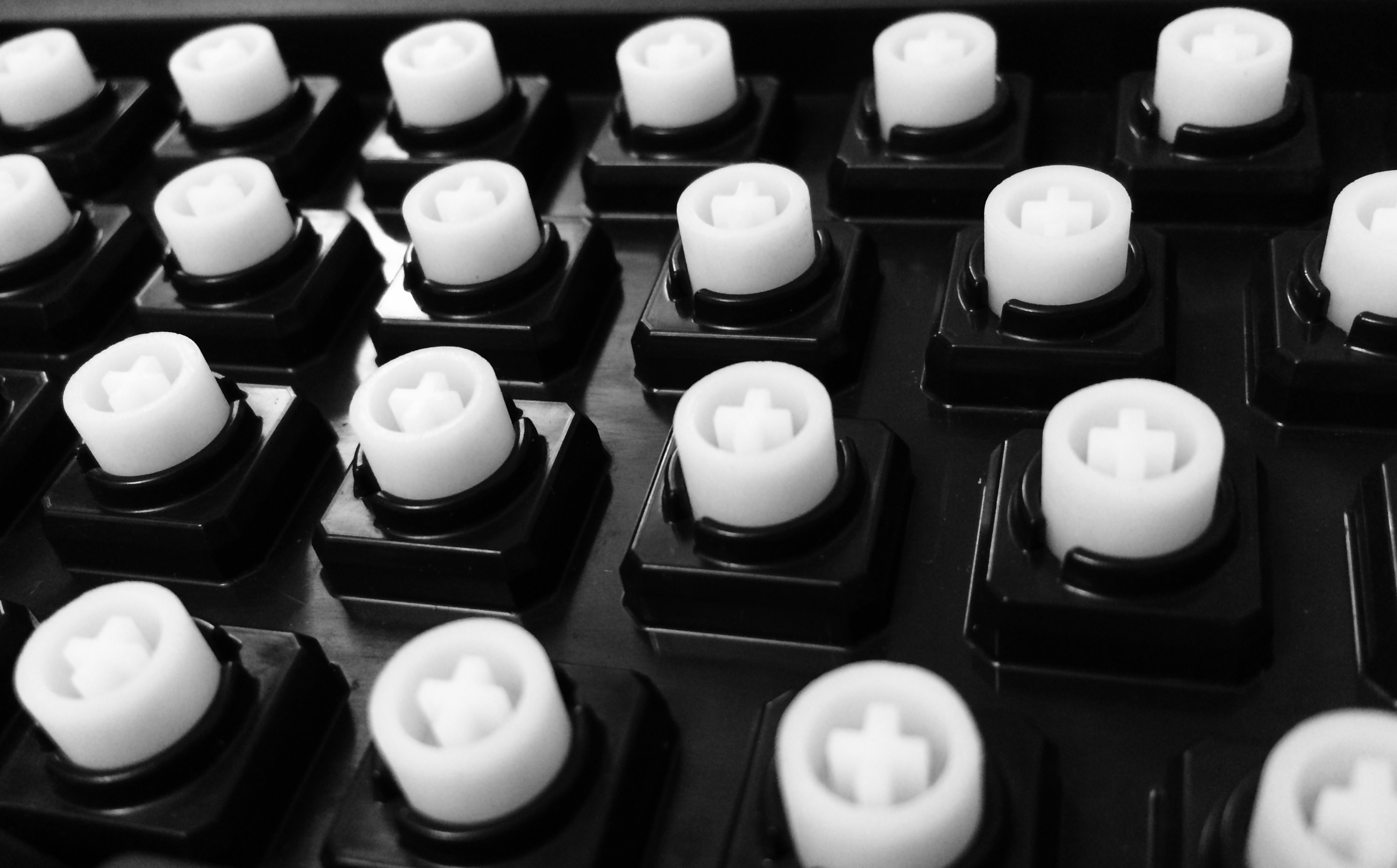 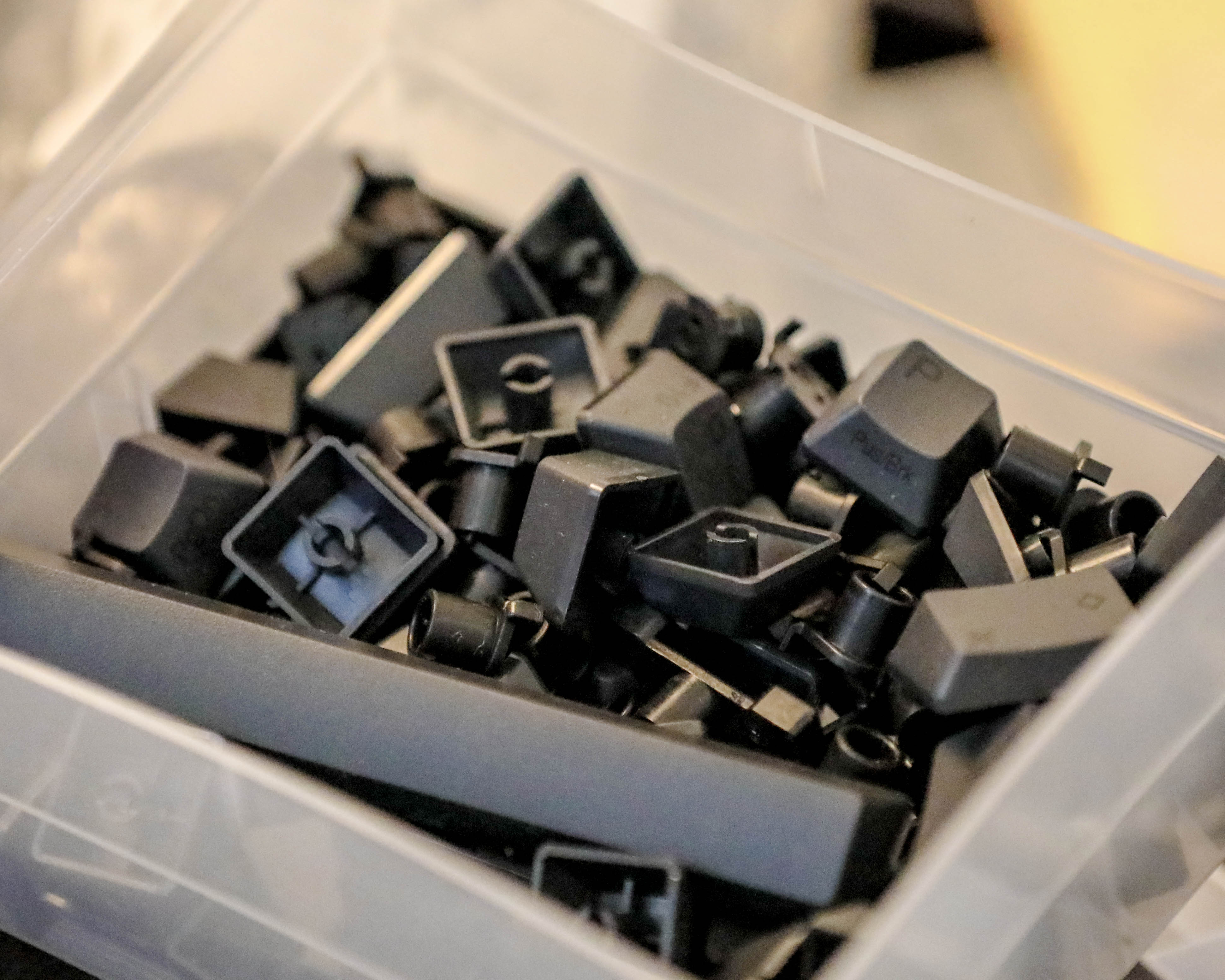 Recently I received the chocolate SA keycap set, and come up with an idea to install the more available 6.25u MX spacebar on HHKB. I replaced the two keys next to the HHKB spacebar with two 1.25u keycaps from the Novelties set from the group buy drop. This left 0.125u space each between those keycaps and the ALT keys next to them. It's acceptable and even unnoticeable to many people. In addition there are also 0.125u space each between them and the original HHKB 6u spacebar. That is, the spacebar can now extend 2*0.125u=0.25u to 6.25u.

From my experience, there are many 1.25u modifier keycaps on the market. The most selling spacebar dimension on the market is the so called "Universal Spacebar". It's 6.25u with 6 stems positioned like this:

Unlike most 6u MX keycaps, the 6.25u Universal Spacebar has a centered stem which makes it possible to be installed on HHKB. What need to be solved are the two stabilizers, and you would probably guessed it correct: I made some new adapters!

After several trials and tests, I eventually came up with this: 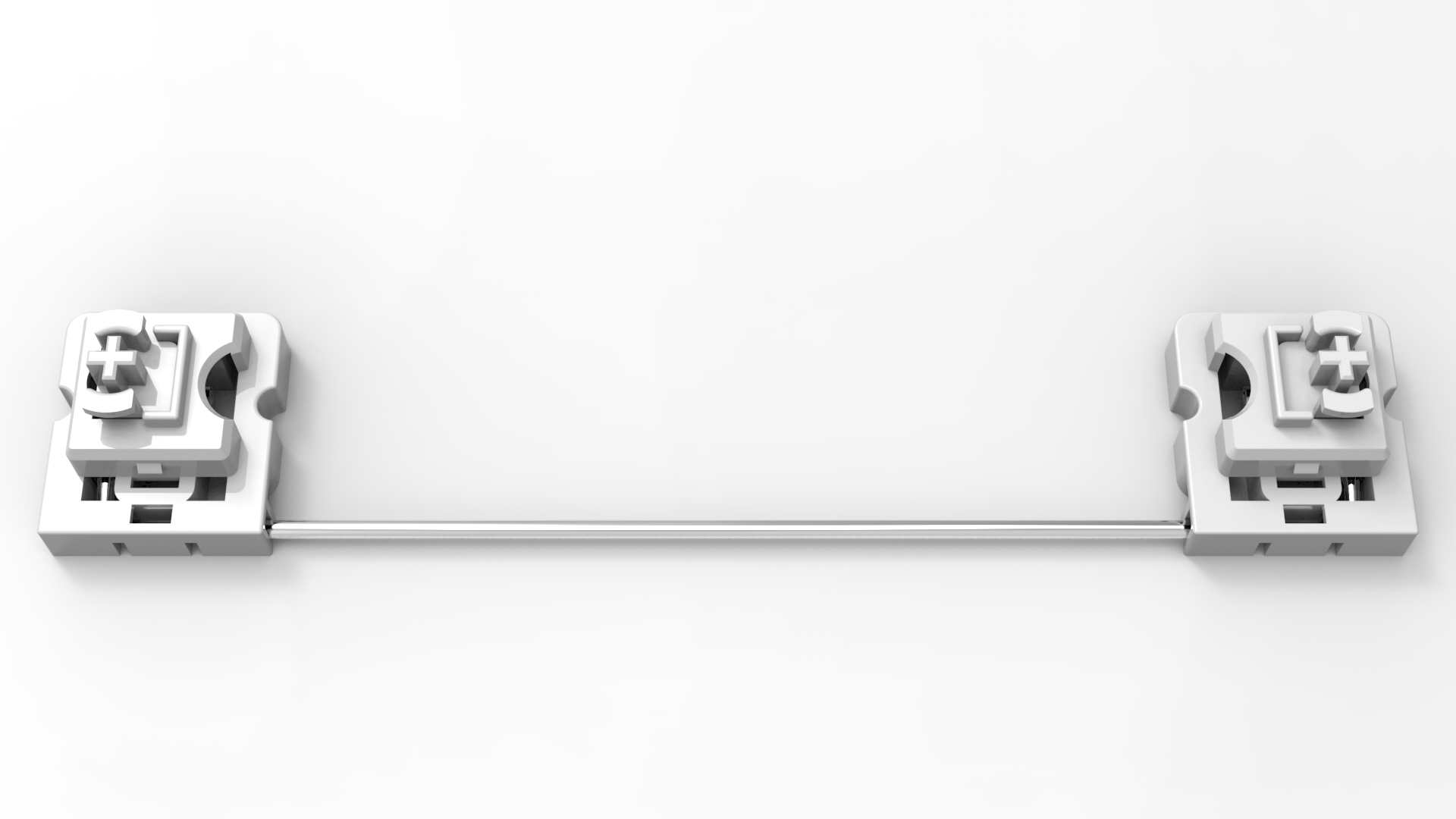 The current version is confidently stable, and is also open-sourced on my GitHub repository.

If you want to use these stabilizers, you have to 3D print all the 4 different parts: a left/right pair of housings, and a left/right pair of plungers. The metal wire came from the original HHKB's wire, and of course you will need the standard 1u Topre to MX plunger at the center. You CAN ONLY use these stabilizers with centered stem 6u MX spacebar with (with the two outer stems 95.25mm apart). If you want to use 6.25u Universal Spacebar, please check out Topre to 6.25u MX Spacebar Stabilizer set above.

When viewing PDF files in Adobe Reader, some PDFs have specified zoom level, and Adobe Reader will use that…